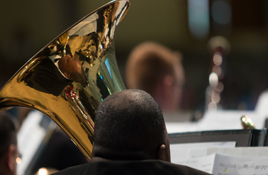 The San Antonio Symphonic Band is a dynamic wind and percussion ensemble that strives to provide the finest in concert band performance to the city of San Antonio and surrounding communities.

It is an all-volunteer organization whose members and conductors receive no compensation, monetary or otherwise, for their efforts. The Band was first created under the name of the San Antonio Municipal Band on September 4, 1986. Shortly thereafter, the Texas Secretary of State issued a proclamation designating the Band as a non-profit organization. This was then confirmed by the Internal Revenue Service under Section Code 501(c)(3).

The Band's first concert took place at the Hemisfair Convention Center on November 30, 1986, with 65 members. The audience consisted of a large appreciative group of delegates to the National League of Cities convention. Thus was born the Band's enduring tradition of excellence and service to the community. Since 1986, thousands of people have thrilled to a sound that can only be created by a top-flight, concert band. The San Antonio Symphonic Band is proud to fill that role. From Sousa marches to classical transcriptions, Fiesta themes, show tunes, and modern concert band literature - this band plays them all, tailoring the selections to the theme of the concert.

The Band has been privileged to perform with numerous soloists and groups over the years. These include Miss Vikki Carr, The Canadian Brass, trumpet virtuoso Allen Vizzutti, and the San Antonio Choral Society. Featured previous guest conductors include Col George S. Howard, Frank Ticheli, Clyde Roller, and Mark Hindsley. Being featured at the Texas Bandmasters Association Convention twice marked a high point for the musicians, but equally exciting is getting the crowds stirred up with Fourth of July patriotic selections.

Cutbacks in arts funding have resulted in the cessation of taxpayer-based financial support for the Band. Despite this setback we have maintained both the frequency and quality of our performances. The Band is dependent on contributions from our audiences and we also earn our own way through fundraising activities.

We have openings in the
band For the following
instruments: 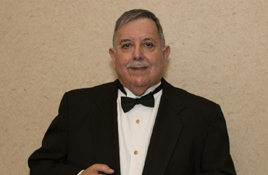 Al, as his friends call him, is a native of San Antonio. He grew up there, but decided, at an early age to seek adventure as an Army musician.
He later went on to achieve his goal of becoming a Bandmaster. As a Bandmaster he had the opportunity to serve two tours in Germany, first in Berlin and later in Wurzburg.
It was there where he developed his passion for the music of Germany and its proper performance.
He has also conducted bands in Vietnam, the United Kingdom, the Netherlands, Belgium, Switzerland, the German Democratic Republic, France and Morocco.
He retired from the Army in 1984 and returned to San Antonio.

He has attended Texas A & I University, Saint Mary's University, Cameron University, the U S Army Bandmaster Course of Instruction and Kneller Hall, the Royal Military School of Music.

He is an active musician in the San Antonio area, a member of many community bands, teaches privately, is the conductor of the Beethoven Concert Band, and is a member of the Texas Music Educators Association and the Texas Bandmasters Association.